Frog Cakes are small cakes made from two layers of sponge with a jam filling, topped by a dome of mock cream and covered in fondant icing. Two fondant “eyes” are piped on top and the dome is slashed through to form a “mouth”. Frog Cakes, produced by Balfours Bakeries, were officially recognised as a South Australian icon in 2001.

Frog Cakes are cherished by Adelaide people as a unique local food. They were introduced by a member of the Balfour family after a trip to Europe. They bear some resemblance to the Swedish Princess Cakes. However since the recipe for these was first published in the 1930s it’s unlikely that they were the direct inspiration for the frogs.

The accepted story of its introduction to the Balfours range is open to question. Wikipedia (yes, Frog Cakes warrant their own Wikipedia entry) asserts that the cakes first appeared in 1922, introduced by Gordon Balfour on his return from overseas. The problem with this story is that Gordon didn’t go overseas until 1928. In fact, in 1922, he was still attending Prince Alfred College in Adelaide. Perhaps it was his father, Jack Balfour, who introduced the Frog Cake after his 1923 trip. He did visit Paris, where French pâtissiers were already making fondant-covered petit fours. So maybe the frog travelled from France to a new home in the antipodes.

Because the cakes were widely imitated, Balfours registered the name and shape of Frog Cakes as a trademark in 2001. For many years they were available only in South Australia. However, Balfours was acquired by San Remo Macaroni Company in 2008 and now have a second factory in Sydney. As a result, the cakes are now available in New South Wales, Queensland and Victoria. 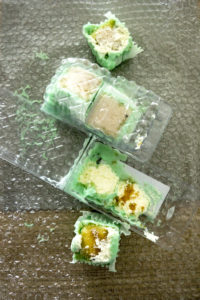 The original Frog Cakes were green, but pink and brown varieties were later introduced. Special colours are also sometimes produced for particular occasions – for example, red frogs for Christmas. Balfours also sponsors AFL football matches between the two Adelaide teams and produces frogs in team colours for the event. People have even been known to have wedding cakes constructed of white frogs, croquembouche-style.

Frog Cakes do not travel well. When I took on the task of writing their company history, Balfours sent me some by courier. Unfortunately, the froggies were travelling during the hottest couple of days of the 2018 summer. And no-one had taken care to put a ‘this way up’ sticker on the package. When they arrived the poor things had been upside down and the green icing had melted. Not the cute little frogs I’d anticipated.

This menu takes you to the timeline for each decade.

The book based on this timeline  can be ordered through your bookstore or from the usual online stores. It’s a nostalgic look at our food history from mutton to MasterChef.  More details here.

And you can still buy my personal account of how Australian food has changed in the baby-boomers’ lifetime. It’s the story of a generation that can remember life before pizza, with a look at the ‘Mad Men’ era of Australian advertising. Buy it now.